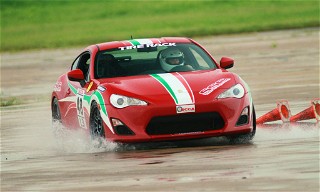 Thanks to Craig Wilcox for Photography

The SCCA® Solo Spring Nationals extended weekend was capped off with the fifth Championship Tour of the year at Lincoln Airpark in Lincoln, Nebraska. As the host of the Solo National Championships later in the year, this event brings people from all over the country, 281 competitors in all. This means hanging out with friends and competitors that you don’t see frequently, throughout the weekend you would see groups of people at local restaurants or around the paddock catching up on old memories, as well as creating new ones.

Nebraska Region once again provided a Welcoming Party on Saturday evening; it featured grilled chicken parmesan and/or eggplant parmesan sandwiches along with several sides. After walking a course full of puddles, Grandmother's Restaurant and Bar was the place to be Saturday night, as a plethora of Solo drivers took over the establishment for karaoke. Hosted by the Midlife Crisis Ninja Turtles (Danny Kao, Van Townsend, Tom Reynolds and Greg McCance) the good food and strong drinks helped to liven the mood with lots of great solo (pun intended) performances. But the highlight of the night was a tossup between the dynamic duet of Vivek Goel and Jadrice Toussant performing Vanilla Ice's "Ice, Ice Baby" and the Turtles' stirring rendition of Wilson Phillips' "Hold On". Fun was had by all, which means dinner and karaoke surely will continue at both Spring Nationals and Solo Nationals in the future.

After a great evening with friends, the following morning literally rained on the parade. Poke your head out the window when you woke up and you were greeted with puddles on the ground and rain sprinkling down. The rain had stopped by the time Doug Gill gave his stunning rendition of the national anthem on the saxophone.

With the rain gone and the sun trying to make a showing, the entire Heat 1 competed in dry conditions. Half of the course was damp, while the other half was full of puddles directly on the driving line. This made for challenging driving conditions and Day 1 essentially came down to last runs to determine positions going into Day 2. Matt McCabe (Sublime Speed Technology, 949 Racing – 1994 Mazda Miata) showed the CSP field that Nebraska Region drivers know how to get it done in the wet, pulling out to a 1.044 second advantage over Todd Cochran (Apruve, Vision Speedworks – 1990 Mazda Miata). Jason Frank (Team Undercoat Racing – 1989 Honda CRX Si) put 0.437 second on Andy Canak (Toyo Tires – 1991 Mazda Miata) in the STS class after the rooster tails settled. 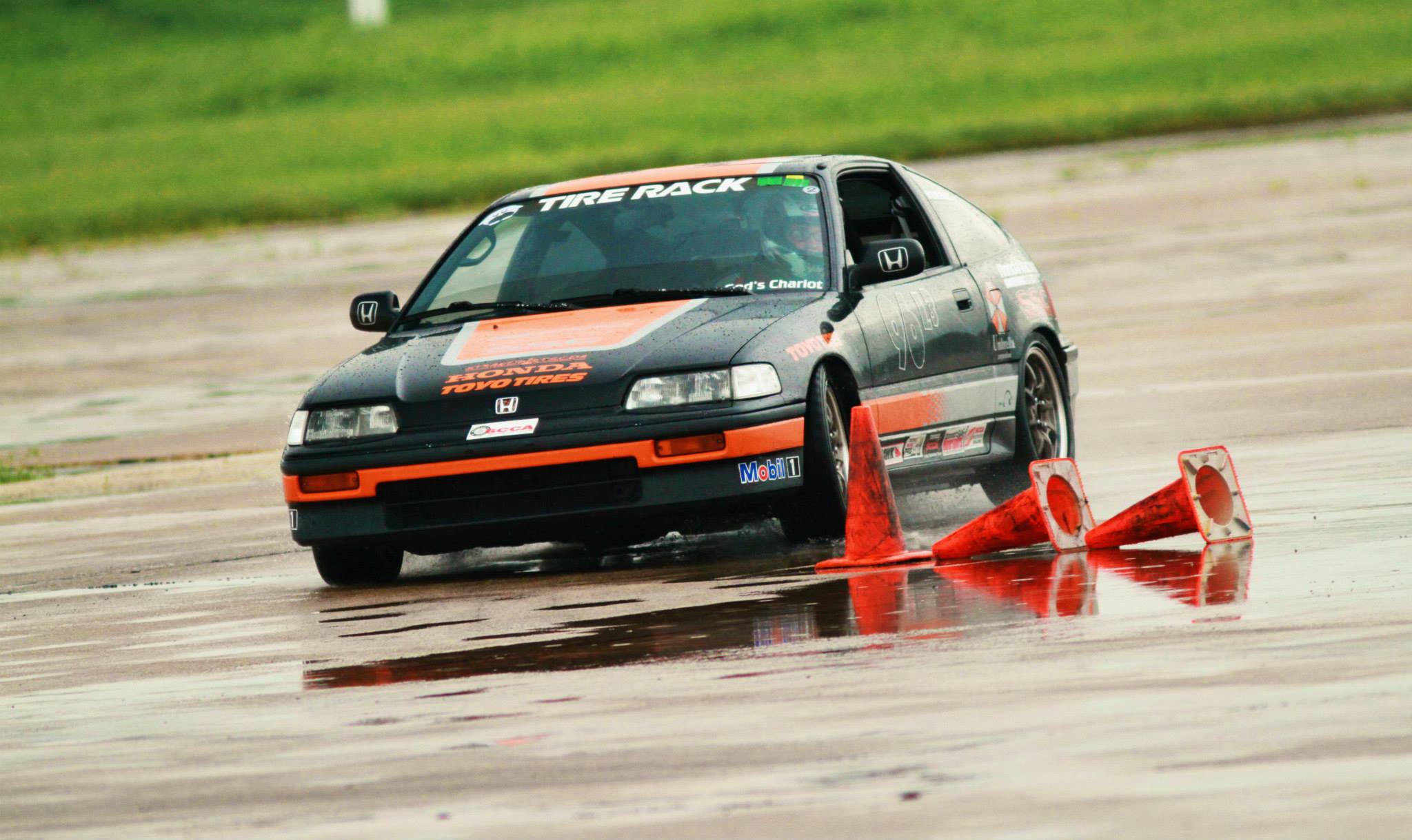 Heats 3 and 4 brought a dry driving line, just in time for a great battle in SSR. The top three spots were only separated by 0.238 seconds at the end of Day 1 competition, leading the way was Jeff Janzen (Automotive Specialist, Eagle Tran – 2002 Chevrolet Corvette Z06) with Andrew Pallotta (Stranoparts/Newmans 200TW Tire – 2004 Chevrolet Corvette Z06) only 0.098 behind, followed by Sam Strano (Stranoparts.com – 2012 Chevrolet Corvette GS) just 0.140 seconds from Andrew. What’s more impressive is that sometime after the ProSolo event, it was discovered that the differential in the car driven by Jeff Janzen (owned by Vivek Goel) was not working correctly, basically rendering the car with an open differential. Want to know something even more impressive? Vivek's car has OEM, 105k mile old shocks on it... only a StranoParts front bar. Wow! Now THAT is Stock!

Heat 5 started out with dry concrete, but that didn’t last long, the clouds rolled in as the heat started and just before seconds drivers took to the course the skies opened up in a major way. Lots of people changed to rain tires, but the grip level was greatly reduced. These conditions led to large gaps in results for classes with two driver cars. Regardless, some fast ladies took full advantage and stuck it to some large classes, Annie Gill (Thanks Danny!/Chickzilla – 2013 Scion FRS) jumped to a 0.409 second lead over Bart Hockerman (Ballistic/BarTuned/Feal Suspension – 2013 Subaru BRZ) in STX after Day 1. After arriving with some missing parts on their car and hopping into a different car for the ProSolo, the orange tiger striped Whitener 1989 Honda Civic Si was put back together and back on the prowl; Kim Whitener (Black Armor Helmets/Texas Track Works) put the car to good use and laid down a time to lead Day 1 by 0.140 seconds over Ron Williams (Toyo Tires/Southwest Auto Service – 1989 Honda Civic Si) in STC. 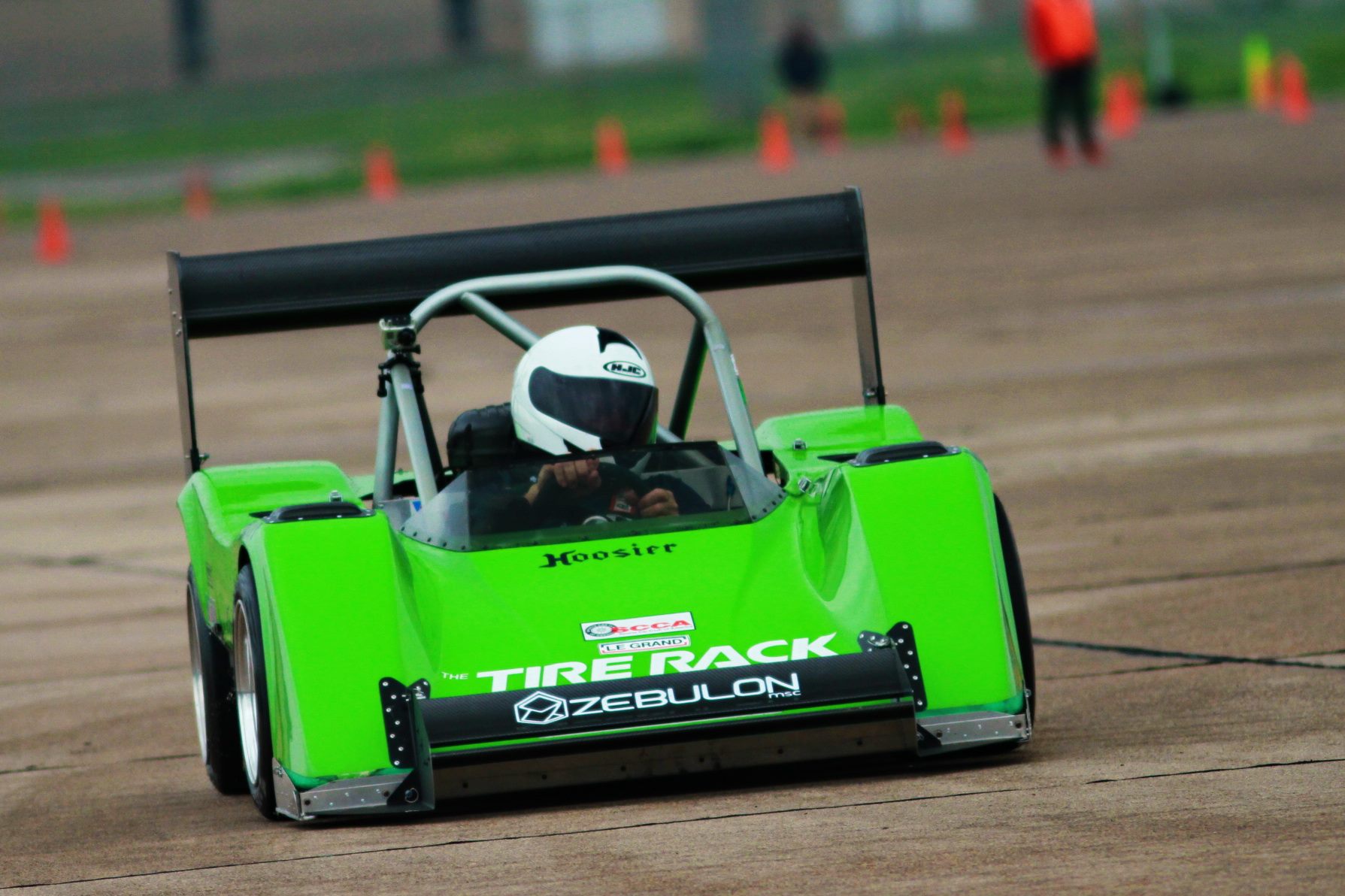 The rain stopped before the end of Heat 5 and held out for a couple hours, however, another large storm from was on the way, forcing the need to close the Day 2 course for walking. Several people didn’t get the expected walks under their belts; however, it didn’t stop them from heading to town to get dinner. Despite the sideways rain, several groups were seen throughout downtown and the Haymarket areas in Lincoln. 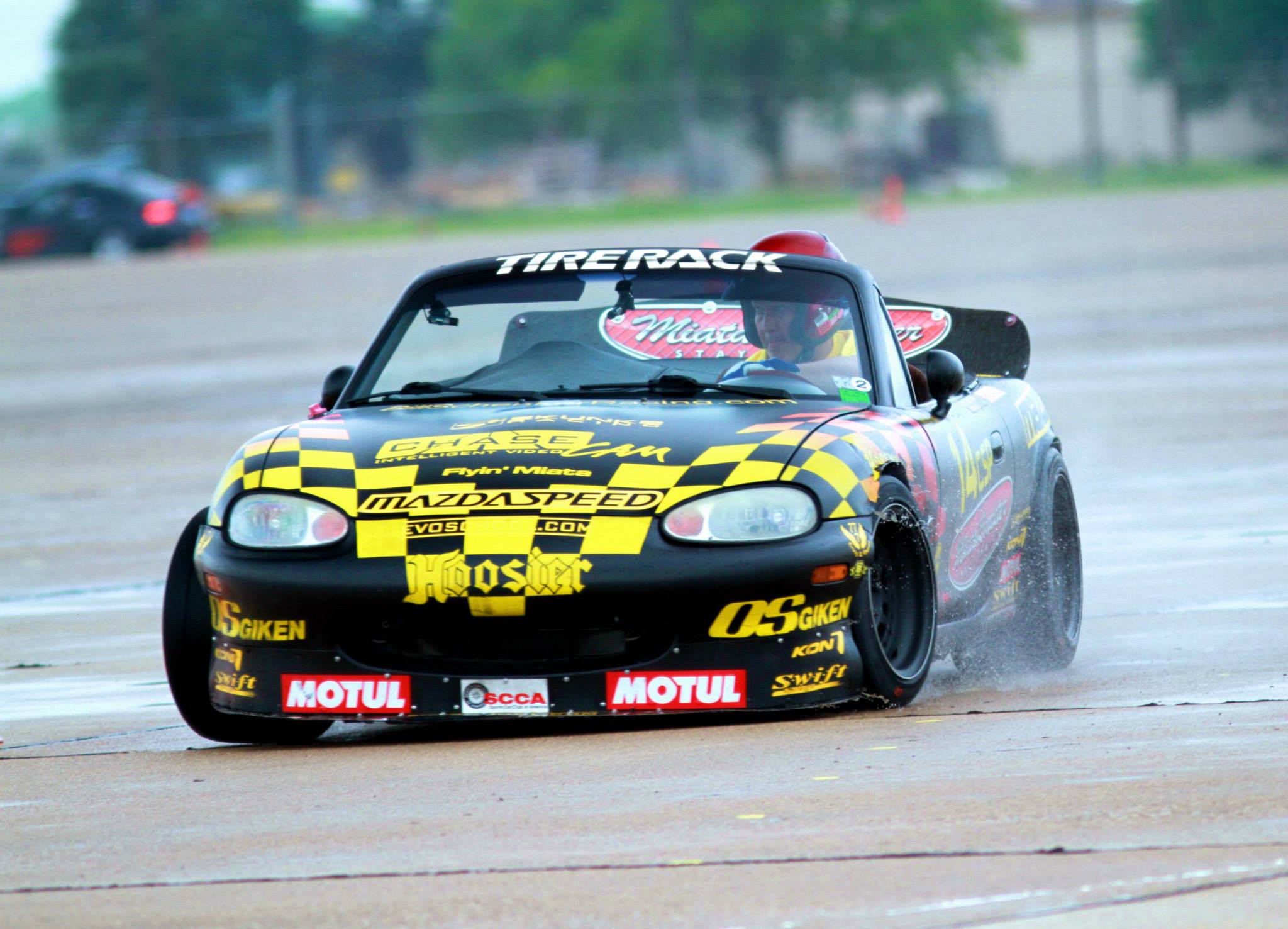 Heat 2 brought, you guessed it, more drying conditions. The first run co-drivers added to their leads in STR and SSP. Matthew Braun won STR by 0.923 over Geoff Walker and Andy Hohl pushed the gap to 1.661 seconds over car owner Joe Tharpe.

In Heat 3, Jadrice Toussain (Strano Performance Parts – 2013 Ford Mustang Boss) from Atlanta Region found himself in a hole in ESP after coning every run on Day 1, however, he was able to put down a smoking second and third run to comeback to secure the win over David Feighner in his 1995 Ford Mustang Cobra R. The win in SSR came down to final runs; Andrew Pallotta posted the fastest class time on his third run, 0.050 faster than Jeff Janzen, but it wasn’t enough to overcome the 0.098 deficient from Day 1, which gave the SSR class win to Jeff Janzen in his crippled Chevrolet Corvette Z06. Sam Strano finished up in third place, and Vivel Goel (Automotive Specialist/Eagle Tran – 2002 Chevrolet Corvette Z06) jumped up to snag the final trophy position.

The competitors in Heat 5 finally got a shot at a course in the dry, Lance Keeley (Feal Suspension/Nameless Performance – 2013 Subaru BRZ) posted the fastest raw time on Day 2 by 0.305 seconds, but it wasn’t enough to overtake the lead of Annie Gill from Day 1; she extended the gap to win STX by 0.590 seconds. On the strength of the fastest raw times in the class, Ron Williams went straight to the top of the results to take the win in STC class; Kim Whitener held onto second place, and Matthew Waich (mnautox.com – 1989 Honda Civic Si) took the final trophy position.

All and all, it was another successful Spring Nationals event at Lincoln Airpark in Lincoln, Nebraska. Thanks to Nebraska Region for all of the work hosting these events, they were out there on Wednesday preparing the site for competition. Installation and removal of the snow fence, course design and setup, two welcoming parties, working with Lincoln Airpark, and all of the other behind the scene details are greatly appreciate by all of us.

If you didn’t make this event this year, you need to get it on your calendar for next year. For those who attended the event and already know all this event offers; see you next year!

Additional information, including full results, of The Tire Rack SCCA Lincoln ProSolo can be found here. More information on the entire Tire Rack SCCA Solo program is available at www.scca.com/Solo. Follow SCCA on Twitter @SCCAOfficial and like the Club on Facebook at Facebook.com/SCCAOfficial.

The next round of the Tire Rack® SCCA® ProSolo Series® will be held at Crows Landing on June 7th-8th in San Francisco, CA.