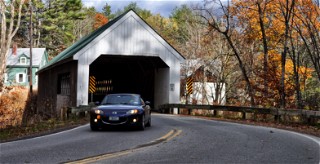 Scott Beliveau was chairman of the USRRC, with John Buffum as rallymaster for the Sunday event, A Bridge Too Far, while Fred Mapplebeck presented the Covered Bridge 50 rally.

On Saturday, the first overall and first place equipped team of Bob Morseburg and Steve Gaddy appeared to have no trouble with the Vermont Covered Bridge tour rally, and were just as impressive in their first overall and first in Class E finish on Sunday’s A Bridge Too Far course rally.  Morseburg and Gaddy with 15 points bested second place equipped class finishers Mack Johnson and Frank Beyer who finished with 24 points, just one point better than the third-place equipped team of Mike Mazoway and Steve Mckelvie.

In addition to Morseburg and Gaddy’s impressive showing on A Bridge Too Far, Class L was won by Pego Mack and Jeannie English, with Dave and Diane Guertin besting the other Class S teams.

Beyer said afterward that this year’s USRRC contest had some serious timekeeping requirements, but the event was a hit and another great way SCCA members have fun with cars.

First-timer Brooke Smith also felt the rally was both fun and challenging.

“We've found the road rally and rally cross communities to be very welcoming,” Smith said. “Everyone hopes for everyone else to do well, even if they are competitors. If you forgot something or broke down, someone will lend a hand.”