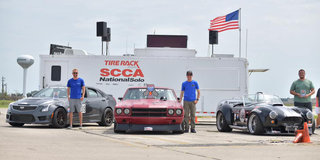 CAM Contemporary was the largest class with 52 drivers. Randy Adkins led from the onset, taking his fastest run of class competition in his first look at the course. Ryan Finch chased him down but came up just 0.012 second short. Alexander Doss claimed the last spot on the podium, having the fastest time of the class, but finishing just 0.111 second behind Finch. Fourth through sixth place trophies were claimed by Louis Cohen, Jeffrey Darbig and James Thomas respectively. Robert Gosda, David Feighner, Ben Bowers and Tyler Chantrenne rounded out the top ten. Taking home the remainder of the fourteen trophies were John Brown, J.J. Mallrich, Christopher Heinzen and Karl Riggs.

In CAM Sport, it was a dominating drive by Sam Strano to take the class win by 1.712 seconds, while also having the fastest CAM times of the event. Paul Townsend finished second, with Justin Peachey just 0.075 second behind. Keeping the racing tight, Stefan Frick was another 0.109 second back, with Steve Waters right on his tail, 0.012 second back in fifth. David Lousteau, Jr. broke up the Chevrolet Corvette party with his FFR Cobra, 0.021 second separating him from Waters. Ray Dsouza and Jon Nwanagu claimed the seventh and eighth place trophies. Jimmy Vajdak and Eric Peachey rounded out the top ten. James Elliott, David Lousteau, Sr., Alek Tziortzis and Alex Krull claimed the eleventh through 14th place trophies respectively.