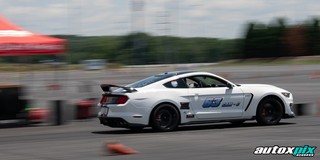 The 2020 Tire Rack SCCA ProSolo® series continued this past weekend in Concord, NC for the 2020 Tire Rack SCCA Charlotte ProSolo. Over the two-day event, 198 drivers took to the mirrored Sam Strano-designed courses. While rain threatened the entire weekend, competition wasn’t halted for weather until Saturday afternoon when the Super Challenge was cancelled due to multiple lightning delays. Super Challenge awards will be distributed based on Challenge Qualification Seeding, as outlined in the SCCA ProSolo rules.

The indexed Classic American Muscle class boasted a robust class of 37 drivers. Trophy winners ranged from a 1969 Chevrolet Camaro to a 2017 Chevrolet Corvette and represented three tire manufacturers. Steve Waters took the early lead in the 2017 Corvette, but co-drivers Justin and Eric Peachey took over the top two positions, with Justin taking the win over Eric by 0.238 second. Waters finished 0.426 second back, standing on his best Friday afternoon runs. In fourth and fifth, Randy Adkins and Berry Langley took the spots respectively, separated by just 0.007 second. Keeping up the close competition, Eric Simmons was only 0.014 second behind in sixth. Matt Colley, Adam Schoonmaker, James Thomas and Keith Lamming claimed the remaining trophies in seventh through 10th, just a 0.086 second spread over the four drivers. After finishing out of the trophies in class competition, Ted Collier went on to win the CAM Challenge.

The second largest class of the weekend was Street 1, an indexed class of everything from F Street Prepared to Super Street Modified Two Wheel Drive cars. Pro racer Tom O’Gorman took a narrow lead early in a 2006 BSP-prepped Honda S2000 over Randall Wilcox in a 1996 SSM Mazda Miata. It looked like O’Gorman would hold on as both drivers found comparable time on nearly every run, but on his last run, Wilcox found the last bit of time needed and took the win by a 0.024-second margin. Despite never holding the lead throughout the weekend, Matthew Glagola claimed the third trophy position just 0.074 second behind O’Gorman. Co-drivers Geoffrey Zimmer and Steven Duckworth claimed the fourth and fifth trophies respectively in the FSP 1977 Volkswagen Rabbit. Eric Anderson claimed the sixth and final trophy position despite missing his Saturday morning runs.

Solo Spec Coupe appeared to be divided early based on those who had practice on the new Falken Azenis RT660 spec tires, with GH Sharp taking the early lead. The rest of the pack caught onto the increased grip and forgiving nature of the new tire though, and Tyler Kvetko claimed his first class win by 0.231 second over Tony Savini. Jonathan Warlof and Peter Jawarski claimed the remaining trophies in third and fourth respectively, with Sharp finishing just out of the trophies in fifth.

In the Ladies classes, both winners made comebacks to take commanding victories. In L1, it was Tamra Krystinik—fighting a fuel starve issue—who came back to win by 1.469 seconds in her DSP-prepped Mazda RX-8. In L2, Laura Marcus overcame red lights on the left side to take a 2.595-second margin of victory. Marcus then went on to claim the Ladies Challenge win in her 2020 Toyota Supra. Her husband, David, won B Street (2WD) by his own commanding margin, 1.084 seconds, earning Top Qualifier honors for the Super Challenge. Due to the cancellation of that element of the event, he was also named the Super Challenge Top Eliminator.

Just before the rain began, the eight-driver Bonus Challenge took to the course. The final matchup came down to Lisa Keyes from Street 4 and David Spratte from SSC. After breaking out in the first round, Spratte trailed Keyes after their first runs of the pairing, but a DNF by Keyes helped Spratte bring home the victory along with a free entry to a future event.

Complete results from the 2020 Tire Rack SCCA Charlotte ProSolo can be found here.

The Tire Rack SCCA ProSolo season continues this weekend, June 26–28, from Heartland Motorsports Park in Topeka, KS. More information about this event and the 2020 ProSolo season can be found here.