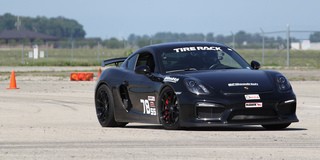 After a quick trip out West, the Tire Rack SCCA Championship Tour visited a classic site at Grissom Aeroplex near Peru, Indiana, for the Peru Champ Tour this past weekend.

The Street category found some new members to hand hardware to at the end of the weekend. Tim Raad made his National event debut in a big way, leading from the first run in H Street and claiming the class win by a 2.435-second margin over David Rudy. John Azevedo scored his first National-level win in G Street, sneaking ahead of Chris Harp on the final day to win by 0.071 second.

Charles Mathews scored a win in E Street, but not before his co-driver had a scary moment in Mathews’ car. Making his final run, Jeff Smucker had the throttle get hung up on the carpet of the floorboard and took a ride off course and into the grass and bushes. Thankfully, the course had been set up safely, there were no injuries and the car suffered only minor damage.

Super Street brought the thunder once again. Sean Greer set the pace on the opening day in his Porsche GT4, but Ryan Miles and Robert Clark both closed the gap on Sunday. Greer had just enough of an advantage, however, hanging on by just 0.012 second over Miles and 0.065 second over Clark for the win.

Multi-time National Champion David O’Maley recently picked up Jinx and Ginette Jordan’s SMF Honda Civic and used the Peru Champ Tour as a warning to the rest of the Street Modified FWD class across the country. O’Maley slammed down a top time on Saturday, then followed it up on Sunday by stretching his lead to a 2.307-second class victory at Peru as well as taking Overall Top PAX by nearly 0.8 second.

Everyone was feeling just Peachey in CAM Sport on Sunday, as Justin Peachey and co-driver Eric Peachey swept the top two spots, with Justin earning the 1.328-second win. Steve Waters claimed the third and final trophy position just 0.132 second behind the latter Peachey.

The Tire Rack SCCA Championship Tour marches on to Lincoln, Nebraska for the Summer Nats Central Champ Tour and a sure-fire preview of Solo Nationals, August 21-23. More information about this event and the 2020 Champ Tour season can be found here.