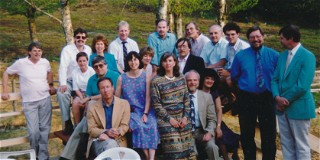 This article first appeared in the October, 2020 edition of SportsCar Magazine. Everyone can read the current and past editions of SportCar digitally here. To become an SCCA member and get SportsCar mailed to your home address monthly in addition to the digital editions, click here.

More than 28 years later, a RoadRally of epic proportions still captures the imagination

A Time-Speed-Distance SCCA RoadRally traveling 3,000 miles through two countries, three states, and two provinces may not seem like something that would draw a crowd, but somehow taking a car through great scenery and twisty roads attracts rally teams.

From May 16-23, the 1992 Downeast Rally to benefit Vermont Special Olympics and sponsored by Michelin Tires and Michelin Travel Guides was just that draw. Karl Chevalier set up the course for the seven days starting in Burlington, Vt., and traveling through New Hampshire, Maine, and New Brunswick, Canada, before turning back toward Vermont via the incredible Cabot Trail in northeast Nova Scotia.

The entry fee of $1,200 for both team members included lodging along the route, a ferry crossing, half of the meals, a welcome party, and an awards banquet. Nearly a dozen teams jumped at the opportunity.

Saturday was the time for registration and technical inspection before joining the welcome party in The Lodge at Bolton Valley located along what was the site of the Bolton Valley Hillclimb.

Sunday’s route passed through Vermont and New Hampshire with the event divided into the four rally sections placed between transit zones. The tentative schedule listed a total of 21 sections for the entire event. The day ended in Ogunquit, Maine, in time for dinner.

Beginning Monday with the route instructions given at 7 a.m., the course ran north though Kennebunkport and on for 50 miles before beginning the transit to Acadia National Park. Errors in interpretation of the transit instructions resulted in an extended break and gave teams in Acadia time for a climb up Cadillac Mountain before starting the five-hour transit to the ferry in St. John, New Brunswick.

The four-hour ferry, too noisy for sleep, arrived in Digby, Nova Scotia, at 4 a.m. to begin travel to Baddeck, Cape Breton, for a midafternoon visit to the Alexander Graham Bell Museum, followed by an evening party at the Inverary Resort.

The start of the return trip on Wednesday that would end mid-day Thursday, took teams for a 200km transit on the Cabot Trail, noted without exaggeration in the event flyer as “one of the most spectacular roads in the world.”

Dinner at the Michelin Plant in New Glasgow, Nova Scotia, with photos next to the Michelin Man was followed by a long night drive to cross New Brunswick into Maine. The route through China, Paris, and Norway ended in Gorham, N.H., with the base of Mount Washington just eight miles away.

Although the famed Mount Washington Auto Road was not yet open to the public on Friday morning, contestants were invited to a private, rare morning at the top boasting a 65-degree F temperature, no winds, and a clear eastern sky.

Later that day, teams started the trip back to Burlington driving continuously through New Hampshire and Vermont until Saturday morning. The flyer’s schedule of events listed the Kancamagus Highway, Vermont Route 100, The Granby Road, granite quarries, and Smuggler’s Notch as likely scenery.

The rally ended at 9 a.m. in Burlington with a parade followed by the cars on display in the city square. The event concluded with dinner and the awards presentation at the Bolton Valley lodge.

The team of Satch Carlson, Tom Grimshaw, and Yale Rachlin finished first in Class A and first over all with 95 points on the 76 scored legs.

Records from Frank Beyer and Debbi Segall, whose teams ran the event, were used to tell this story. A description of Bill Laitenberger’s one-day airplane delay and drive through Acadia, along with eight pages or so of Carlson’s driving adventures contained in the August 1992 Roundel Magazine are part of those records.

The teams who ran the event are very capable and can be extremely competitive, but almost three decades later they would rather talk – and write – about the fun they had more than the points scored.