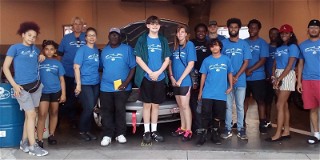 When we talk about barriers to entry in motorsports, experienced participants often talk about tangible efforts – equipment, fees, tires and more.

When Wesley Brown talks about eliminating barriers to entry in motorsports, he means barriers like “knowing that organized motorsports exist.”

We at SCCA.com first recognized Brown when he lugged his Mustang GT in a box truck to Pitt Race despite living in Florida, just for a drivers’ school to get his competition license. Not unusual in and of itself, but it was late in the year, he was a long way from home, he had headed north – what was going on with this guy?

The answer, as it most always does for Brown, was not in him particularly. Yes, he was on his way to (successfully, we might add) getting his comp license. But what was less obvious was the bigger picture

“I wanted to race in Daytona last month, and that school was the last one of the season,” Brown said. “The two kids that I brought up, John is my son and he’s autistic. Jasmine is autistic, when she graduated high school we got her in the automotive program at Daytona State college. She graduated top of her class, and I told her I’d pay her to be my crew chief. So I got that Uhaul truck, loaded the car, the tools and the spare parts, and we drove it up to Pittsburgh.”

Brown grew up in New York City, went to an aviation high school, and graduated as an AV mechanic. He left New York, moved to Florida, and graduated from Embry Riddle with a degree in aviation technology, and then went to work at the airport. He did everything – mechanical work, loading and unloading planes, towing aircraft, and earned a CDL while he was there. As a kid, he looked up to his brothers, who built hot rods, drag raced at Englishtown in New Jersey – and, yes, did some street racing. It was par for the course in New York City and other places at the time – and probably still is now.

“There wasn’t as many cars on the road back then in the 70s and 80s,” Brown said, not making an excuse but stating a fact. “It’s even more dangerous now. So from that aspect, I try to keep them from drag racing on the street. Come and go to the track. If you want to speed, take it to a closed environment. I’m trying to work with at-risk kids, autistic kids, kids with ADHD, and I’m trying to start a group with Central Florida Region and do a diversity league. I’ve got 10 drivers, three of us are licensed already.”

That’s just a part of the Minority Racing Association, though.

“My vision is more young kids involved in motorsports that wouldn’t normally have the opportunity to do it,” Brown explained. “The name of the program is Minority Racing Asscociation, but in this country you have to educate people. I tried to get a grant from somebody, and they told me we can’t help you because you only help minority kids. So I had to explain to them the Webster’s definition of minority. It’s less than half the majority. It doesn’t mean race, it doesn’t mean color, it doesn’t mean creed. It’s about numbers.”

It starts at the bare essentials.

“I do a class on sim racing,” he said. “I’ve got a guy from Orlando who comes over and brings his simulator, and I bought two. We teach kids about virtual and sim racing, because now before you go to a track you can practice.”

But he also helps those who may not want to get behind the wheel.

“I’ve got a friend who is donating some graphic machines,” Brown said. “Now, I can teach the kids how to do graphics and we can do our own decals. It’s not about just driving. There’s so much more to motorsports than just driving. “

And, as we started with, mechanics who want to get involved, including building that Mustang GT that Brown used to get his racing license.

“They’re learning to build cars with mechanics,” Brown said. “Computer technicians. Tires. They can learn different tire compounds and when to use them, temperatures, air pressures. You’ve got so many different specialties that branch off from the driver, these kids would never be bored. They’ll find something they like if given the opportunity.”

Those opportunities don’t come from just being hands on with the car. Brown told the story of one young man who he could feel slipping away from the program.

“He did not want to work on the car. It wasn’t what made him happy. I had a manager from O’Reilly’s come in, and he taught them on the computer how to order parts and determine what parts you need. He ate that up. He was happy to come every day to get on the computer and do that.”

In all, Brown recognized a need in a sport he loved. Though NASCAR and IMSA both have diversity programs that are successful at the professional level, those programs mostly require some sort of motorsports background to make headway – a hill to far to climb for many of the young folks in Brown’s program. But it’s a model for the baseline that prospective candidates need.

“That’s what I want to do, a program at the SCCA Club level where it would bring diversity,” Brown said. “Once these kids shine, now we’ve got a platform where we can take them to the next level. But if we never get them into the Club, they’ll never get to the top.”

Brown is aware of the challenges, of the hurdles, and of the long shot nature of stepping into this program. He also believes it to be the right thing to do.

“God gave me that opportunity, and if I don’t use it that means I’m wasting a gift that he gave me,” Brown said. “I need to share it with others.”

More information on the Minority Racing Association can be found at www.mra-fl.org. To make a donation to the 501(c)3 organization, visit mra-fl.org/support.