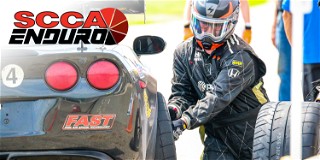 When the green flag flew at Nelson Ledges Road Course for the inaugural SCCA Enduro National Tour in May 2022, SCCA entered a new era of road racing. What was once simply an idea suddenly became reality, with teams rocketing around the track competing in a pair of eight-hour races. Now, the SCCA Enduro National Tour heads to VIRginia International Raceway in Alton, VA, on Aug. 6-7, 2022, with registration already open.

The SCCA Enduro National Tour at VIR will be something to behold. VIR offers rolling hills, blind corners, long straights, and the challenging esses leading into South Bend and Oak Tree Curve – but there’s more to the weekend than that. SCCA’s Enduro staff learned plenty at Nelson Ledges, and they’re working to institute as many upgrades to the series as possible, all for the enjoyment of the drivers, crew, and spectators.

“We call it an endurance race, but the reality is there are two events – one event is on track, and one event is in the pits,” says Jon Krolewicz, SCCA’s Event Lead for the Enduro National Tour. “How we handle those two simultaneous events is important, and the teams have to make the best of both of those events to win their class. As officials, we have to look at how we can make the most of both of those events ourselves. Even though I’ve participated in endurance events myself, seeing this in action at Nelson Ledges was a lightbulb moment, and it’s something we’re working to enhance as the season progresses.”

If you’re planning to attend the 2022 SCCA National Championship Runoffs at VIRginia International Raceway this Sept. 24-Oct. 2, and you’ll be competing in either Spec Miata or B-Spec at the Runoffs, this SCCA Enduro National Tour is a can’t-miss event.

The Spec Miata Team Challenge involves SCCA Enduro driver lineups comprised of at least two drivers who have participated in the Runoffs in Spec Miata any year from 2019-’21. The car they’re competing in during the SCCA Enduro National Tour at VIR must be a Mazda Miata powered by a Mazda engine in the E4 class. Of those teams, the highest finishing eligible Spec Miata team each day will receive a $600 credit toward the 2022 SCCA National Championship Runoffs, used however the team sees fit. And yes, one contingency prize will be awarded each race day (Saturday and Sunday).

The B-Spec Team Challenge sports similar requirements, with at least two team drivers needing to have competed at the Runoffs at least once from 2019-’21 in B-Spec. These teams must compete in the SCCA Enduro National Tour at VIR in an eligible B-Spec race car run in the E4 class.

The Spec Miata and B-Spec Runoffs Contingency Programs require no registration – show up, do well, and win prizes!

SCCA Enduro National Tour weekends involve two races that are usually up to eight hours each, one on Saturday and the other on Sunday. Vehicles are divided into four classes, E1 through E4, with modification allowances determined via a simple chart and spreadsheet.

Drivers needn’t hold a traditional SCCA Competition License. Thanks to programs like the Tire Rack SCCA Time Trials National Tour Powered by Hagerty, Track Night in America Driven by Tire Rack, and SCCA Autocross, those with other forms of motorsport experience can apply for an SCCA Enduro license.

The event registration process is as painless as vehicle classing and driver licensing. In fact, while the rules require at least three drivers for enduros exceeding six hours, event registration is possible without any drivers locked in – all you need is a team captain to reserve your place in the fun. There are a limited number of spots available, so click the link below and get started!