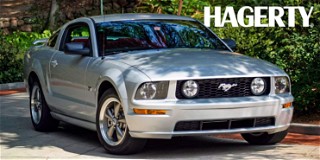 Get a Miata, they say. Miata Is Always The Answer, they insist. It’s true, unless, as Rob Sass – writing for Hagerty Media – notes, the S197 Mustang is a better solution for you.

Looking specifically at the early years of the fifth-gen S197 Mustang, which spans model years 2005-’09 (2010-’14 models sported a facelift and more power from the V-8), Sass presents solid points as to why people should consider picking up an S197 Mustang as their next fun car. And while he doesn’t go into these particulars, early S197s are solid performers in SCCA circles.

When it comes to easily accessible SCCA classes, the V-6 variant appears in Touring 4 in SCCA Road Racing competition and Sport 4 in SCCA Time Trials. Want the grunt of the 300 hp V-8? Those models appear in Touring 3 and Sport 3 for Road Racing and Time Trials. The V-8 could also be a decent option for Solo’s CAM-C class. And with either motor, class options abound if you’re willing to dive in and get your hands dirty.

Sure, more power would be heavenly, but as Sass notes, the early S197 Mustangs have a distinct advantage over earlier and later model year Mustangs when it comes to bang for the buck:

“While there’s nothing particularly hateful about the base V-6 cars – and in fact they make more power than many of the Fox-body-era GTs – you don’t need me to tell you that it’s the V-8 that you want. The 4.6-liter three-valve, SOHC modular V-8 in the standard GT cranks out 300 hp and 320 lb-ft of torque, significantly brawnier than even the hottest non-Saleen Fox-body variant, the SVT Cobra R from 1993. Of course, things got even better in 2010 with the second coming of 5.0-liter V-8 power. That said, those late-model Mustangs seem to have exited their depreciation cycle early and are already creeping out of fun-money territory.”

“Not so for the 2005–2009 S197 Mustangs. Like all used cars, their values are up, but a quick look at ads for Mustang GTs wearing under 100,000 miles reveal prices in the low-to-mid teens, which corresponds to the Hagerty Price Guide’s current value for one in #3 Condition. In comparison, nice Fox-body cars seem to start exclusively in the high teens, and climb quickly into the twenties for cars with better equipment and lower mileage. Manual S197s bring a premium, as do the California Special and the Bullitt versions, but not huge ones.”

There’s more to be said about the early year S197 Ford Mustangs, so click the button below and read all about it on Hagerty.com/Media.