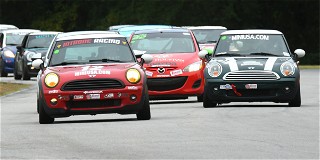 Steve Introne of Windham, NH had a plan to win the B-Spec championship at the 59th SCCA National Championship Runoffs — taking place Sept. 24-Oct. 2, 2022, at VIRginia International Raceway (VIR) — in the No. 12 VeloceEng/Black Hog Beer/BosMblTire MINI Cooper. And, it worked.

Behind the two MINIs on the grid sat 10-time Runoffs winner and B-Spec defending champion David Daughtery of McCordsville, IN, in the No. 1 Bill Black Racing Chevrolet Sonic. Outside in fourth position was the No. 7 Team Effort Motorsports Mazda2 of Matt Wolfe, from Waterford, MI.

As the 30 B-Spec competitors took the green flag on the second of three Hagerty Race Days, Daughtery ran for the outside to pass the leading MINIs, but couldn’t get it done as Introne and Hromin hooked up and began executing their plan. The two drivers stuck together and used the increased speed and double length of their cars to make passing difficult on VIR’s long straights and technical turns.

“That was the plan,” Hromin said. “I raced Spec Miata for a long time. The way I always look at it is that I’m going to push whoever’s in front of me until we have a nice gap, then I’m going to race for the win.”

“I’m a Spec Racer guy,” Introne replied. “We’re used to running close, having to have partners. So on the test days, we went to see whether we were faster with Rich [Hromin] in front or me in front. We were both faster with me in front. That’s what we wanted to do, and it worked out.”

“Until the race went yellow, I had a fighting chance,” Daughtery said. “Once it went yellow, they started breathing again, and they settled down and started driving. They were hooked up!”

The yellow Daughtery mentions happened on the fourth lap, when Matt Giuffre of Chelsea, MI got sideways in his No. 52 Hawk/Flying Ghost Ford Fiesta, and rolled the car onto its roof. Giuffre got himself out of the car and was not injured in the incident, but the cleanup brought out a full course caution and a safety car for several laps.

At the restart, Hromin and Introne simply renewed their cooperation and made an impenetrable wall for Daughtery and Salyer. With drivers of this caliber, any mistake would result in a change of position, but the mistakes never came. Because of the time lost to the yellow flag, the race went to its 35-minute time limit, completing 12 of the intended 15 laps.

As the leaders approached the checkered flag, Hromin made a final charge to draft around Introne, and if the front straight were just a hundred yards longer, he might have made it. As it was, Introne claimed the victory with a margin of just 0.078 seconds, barely a bumper’s worth of distance. Daughtery finished third, with Salyer taking fourth place. Fifth place went to Dan Sheehy of Arley, AL in the No. 9 Ala Lone Wolf Racing/Phillips Race Prep MINI Cooper. The Sunoco Hard Charger award went to Blair Deffenbaugh of Sylvia, NC in the No. 87 FasterSkunk Racing/Racing for ALS Honda Fit, gaining seven positions during the race.

Introne was emotional on the podium, as his family celebrated the legacy of his late father, Robert Introne, who was a past Chairman on the SCCA Board of Directors.

“I think I cried the whole last lap after the checker,” Introne said. “My father passed last year, and my father did everything in SCCA. He was so proud last year when I got third at the Runoffs at Indy. I know upstairs he’s saying we did it even better this time.”

The top three drivers were greeted at the victory podium with a bottle of bubbly form Mazza Vineyards, the “Official Sparkling Wine” of the Runoffs.

Live, online video coverage of Runoffs races, presented by Mazda, is available throughout the three days of competition at SCCA.com/live, and at SCCA’s official YouTube and Facebook social media channels. Live timing and scoring for each race is also available at SCCA.com, along with an audio-only feed from the Super Tour Radio presented by Hoosier Racing Tire broadcast team.