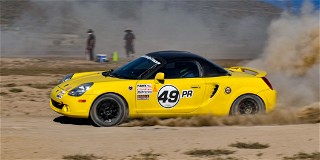 Nine runs over two gorgeous days crowned nine SCCA RallyCross National Champions at Pikes Peak International Raceway in Fountain, CO, on Sept. 24-25, 2022. An even 100 competitors placed the event at its cap, maximizing both the competition and the fun.

Because every run counts in RallyCross, each moment on course is vitally important. The RallyCross National Championship rewards speed, of course, but also consistency and flawlessness – no easy task when course conditions constantly change and the driving talent is among the best in the nation.

As for this year’s RallyCross National Championship, we saw some of the usual cream rise to the top, while others who are often at the pointy end of the field struggled to keep pace. We also witnessed heartache in one class where even that driver’s competitors were left speechless.

Rookies, Domination, and Drama – Oh My!

Dwight Wood’s performance at Pikes Peak earned him the Rookie of the Year award to go with a Stock Front Wheel Drive championship – but he earned the title like a wily veteran. Wood took his Nissan Sentra out for a conservative first run on the first day, then laid down a pair of quick runs to set the opening day’s pace in the class. He then flipped the script in the longer second day, tossing down a fast lap while the course was in its best shape and then made strong, consistent runs to earn the championship.

Leon Drake continued to prove he’s not a one-trick pony – to no surprise to anyone who follows SCCA RallyCross competition. Drake’s 12.856-second cumulative advantage over the nine runs earned him the Modified Rear Wheel Drive (MR) title in his Porsche 914. That MR title will sit on the shelf next to previous Prepared Front Wheel Drive, Modified Front Wheel Drive, and Constructors 2 trophies.

Warren Elliott remains the king of the dirt in SCCA RallyCross. As usual, steady and fast runs from Elliott were the ticket, and his final (and narrow) 4.3-second difference over Mark Hill earned Elliott a record sixth National Championship title in RallyCross competition.

The most drama – and arguably largest heartache – came in Modified All Wheel Drive. Boasting 26 cars, Jonathan Olschewski was competing in the largest field at the competition. Unfortunately, his domination in the class spanned only eight and a half runs, not nine. On his final run of the weekend, Olschewski’s Cadillac-powered Isuzu Impulse RS stopped on course with a mechanical failure, leaving him with a DNF and dropping him to third behind Austin Dowda and Kent Hamilton.

In recognition of his effort, Olschewski was presented with the event’s True Grit Award.