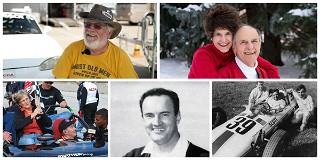 The Sports Car Club of America will soon honor Costa and Wilma Dunias, Robert “Rocky” Entriken Jr., Jim Jeffords, Kent and Kathy Prather, and Bill Scott as they join SCCA’s Hall of Fame as the class of 2023. Combined, their experience spans the Club’s history from 1954 to today, doing everything from winning SCCA National Championships to racing internationally, leading events, commemorating the Club’s history, developing successful racetrack businesses, and beyond.

Costa and Wilma Dunias, Robert “Rocky” Entriken Jr., Jim Jeffords, Kent and Kathy Prather, and Bill Scott will officially join the SCCA Hall of Fame during the virtual Hall of Fame Induction Ceremony on Jan. 20, 2023, as part of the 2023 SCCA National Convention.

Here are but a few of their accomplishments.

Members of the SCCA since 1967, Costa and Wilma Dunias moved from Texas to Colorado for Costa’s job as a Senior VP at the SCCA, a position he held for 12 years. Costa was a very active race steward while Wilma served as the National Administrator of Timing and Scoring. Together, the pair chaired the 1977 Solo National Championships, with Wilma staying on as event chair in 1979.

As an SCCA employee, Costa was responsible for overseeing various program departments. He was also instrumental in establishing a race steward training program for new participants, advising in the writing of a “Stewards in Training Manual” as well as the “Executive Steward’s Manual.” Costa also advocated for the involvement of more women in the steward’s program, and was directly responsible for the establishment of Sports Renault, the class now known as Spec Racer Ford Gen 3.

Following his employment with the SCCA, Costa and Wilma continued their dedication to the Club and SCCA Road Racing, with Costa volunteering as Race Director, Assistant Race Director, Chair of the SOM, and Chair of the National Stewards Program, and is currently serving on the race program’s Court of Appeals. Among other duties, Wilma has worked to assist Costa in his role as Race Chair at the Runoffs.

In 1985, Wilma received SCCA’s John McGill Award for significant contributions to the Club Racing program; Costa earned the same award in 2007. In 1987, Costa was presented with the Woolf Barnato Award, and in 2005 he received the David Morrell Memorial Award.

Costa and Wilma are true SCCA advocates, continuously going above and beyond for more than five decades.

Better known simply as “Rocky,” Robert Entriken Jr. has been a force of nature for the SCCA. Starting as an autocrosser at a non-SCCA event in New York, Rocky returned home to Kansas the following year with a 1964 Triumph Spitfire he purchased from an SCCA member – the same blue and yellow Spitfire he still owns.

Joining the SCCA in 1971, Rocky immediately became involved in the administration of the Club, earning the title of Regional Executive in 1974 and then Chair of the 1975 Solo National Championships. In 1990, he helped found SCCA’s Salina Region. He’s been the Midwest Division Mid-Am points keeper and the National Divisional Championship points keeper; in addition, he received his National Timing and Scoring license in the early 1970s, and his National Pit and Grid license in 2006.

In 1973, Rocky was assigned to cover the inaugural Solo National Championships for SportsCar magazine, and has covered the event every year since, with the exception of 1975 when he was the event Chair.

Rocky has garnered many Regional, Divisional, and National awards including the Solo Cup, England-Stipe (Midwest Division’s highest award), many Best Story awards from SportsCar magazine, and the Vern Jaques Award, SportsCar’s highest award for contributions to the magazine. His competition awards include a National Solo I championship, plus multiple Midwest Division Solo Series and Solo II Championships.

Rocky is also the creator and keeper of the invaluable Solo Stats book, which contains not only the history of the Solo National Championships, but also a log of every competitor who has ever competed in the event since its inception in 1973, as well as all of the records that have been set along the way.

It’s no understatement to say that through Rocky’s dedication to the sport, the history of SCCA’s Solo program has been recorded for the ages.

Joining the SCCA in 1954 through the Milwaukee Region, Jim Jeffords served on the Road America Board of Directors, later becoming the Vice President of the track, from 1958 until his passing in 2014, supporting such events as the Chicago Region June Sprints. But Jim was also a driver, starting in 1954 in a Jaguar XK120 and XK140, where he won 14 of his first 17 races. Jim was leading four Corvettes in his XK140 during the 1956 June Sprints, and while he ultimately scored a DNF, his performance caught the eye of General Motors executive Ed Cole, who reportedly commented, “That’s the last time you drive against us.” With that, a partnership was struck.

Driving the famous “Purple People Eater Corvette,” Jim was a powerhouse in 1958 and ’59, winning 27 races, including the June Sprints, setting numerous track records and winning the SCCA National Championship both years in B Production.

In 1958, Jim drove his Corvette SR-2 in SCCA events as well as the 12 Hours of Sebring. In 1959, he drove a purple Scarab, winning an SCCA event and a couple USAC races, beating racers like Augie Pabst, Rodger Ward, and Lloyd Ruby. Also in 1958, he won his events during the Nassau Touring Trophy race in the Purple People Eater Corvette, won a race during the 1960 Havana GP in Cuba in a Comoradi Corvette, and then raced a Camoradi Maserati Tipo 61 Longtail at Le Mans in 1960. Later that year, he won the Road America 200 in a Maserati, beating Augie Pabst, Carroll Shelby, Jim Hall, and more.

Prior to his passing, Jim had been inducted into the Corvette Hall of Fame, was awarded the State of Wisconsin Governor's Cup (also known as the Road America Governor’s Cup), won the Cliff Tufte Award for his contributions in road racing, and became a member of Legends of Riverside and the Road Racing Driver’s Club.

Kent and Kathy Prather epitomize the perfect racing partnership. While Kent was always the face of Prather Racing both on and off the track, the business and family would not have achieved the level of success without Kathy.

Away from the track, Kent served in leadership roles with SCCA’s Kansas Region and Kaw Valley Race Group for more than a decade. In the shop, Prather Racing became the premier car and engine builders for British racing cars and Production-prepped Miatas. And while Kent and Kathy are now retired, that tradition continues through their son Jesse, who runs his own successful race car prep shop. At the track, Kent won eight SCCA National Championship Runoffs titles, with six earned in his iconic MGA. Those exploits resulted in him receiving SCCA’s President’s Cup and Kimberly Cup. Many more championships and awards were also won by those who drove Prather-built race cars.

Through the years, Prather engines were rivaled only by those from Huffaker Racing, with both Joe Huffaker Sr. and Joe Huffaker Jr. being previously inducted into the SCCA Hall of Fame.

To this day, if you’re in Topeka, KS, on a Thursday night, the Prather Racing garage is open to friends and visitors for “shop night.” You never know who may drop by with a six pack and snacks to share while talking about cars and racing.

Bill Scott’s racing career humbly began in 1964 with an SCCA Driver’s School; he and his instructor, the one and only Mark Donohue, formed a friendship that lasted for years. From there, Bill went on to compete in Formula Vee both in the U.S. and internationally.

In 1969, Bill formed Bill Scott Racing, with his primary role being a driver coach. In the 1970s, he started a competition driving school at Summit Point Raceway – now known as Summit Point Motorsports Park – later adding anti-kidnapping and counter terrorism training for chauffeurs, as well as an accident-avoidance school for young drivers.

In 1979, Bill Scott and Tom Milner purchased a struggling Summit Point Raceway. Together, they proved that the track could be successful when operated seven days a week – a business model now used by many tracks. During his ownership, he expanded Summit Point from a one-circuit, 300-acre facility to its current four-circuit, 800-acre complex.

The SCCA Hall of Fame